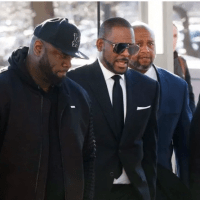 One of my favorite R&B stars from the 90’s has been hit with another warrant after reports of a no show in Minnesota.

Kelly was due in a Hennepin County, Minnesota courtroom today after he was charged with multiple sex crimes in that state.

As everyone in the country knows the ‘I Believe I Can Fly’ singer is currently behind bars on very similar charges in Chicago. So, the only way he was going to make the hearing is if someone came and got him.

They didn’t. So, the clerk in the court began the proceeding by asking if there a Robert Kelly in the courtroom. What? As expected there was no one by that name so a warrant was issued for his arrest.

The judge and prosecutor did say at one point they expected Kelly to be no show to the hearing.

The Minnesota case is connected to a matter in 2001 where Kelly allegedly paid a 17-year-old girl to strip for him. Yuck.