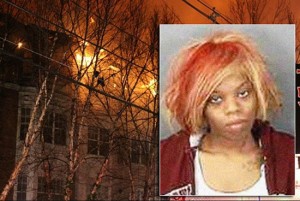 A heartbroken New Jersey woman accidentally set fire to her apartment after she learned her boyfriend was cheating on her with other men.

Williams, who was arrested in December, appeared in court on Friday for a bail reconsideration hearing.

After police pulled Williams from the burning apartment they found evidence that she started fires in two rooms.

Police found charred paper on a stovetop and they found broken glass and more charred papers in the living room near an aerosol can.

The 25-year-old mother-of-two was reportedly “distraught” after she found evidence of her boyfriend’s homosexual affairs with men online.

“She was devastated,” said her attorney Caroline Davis.